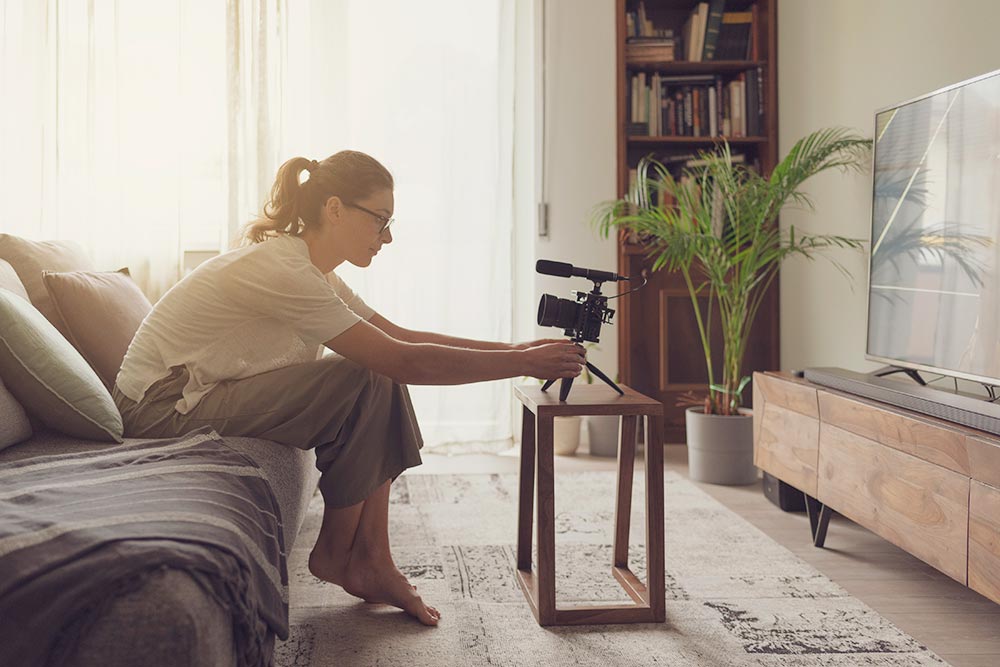 Digital ad spends are up—but human attention spans are down. In 2019, U.S. advertisers spent $57 billion on digital advertising, a $9.8 billion increase from 2018. Meanwhile, the average human attention span dropped from 12 to 8 seconds between 2000 and 2018. Mostly thanks to technology. For marketing and advertising companies, a distracted virtual world, this means ads need to be more contextual, intentional, and relevant than ever before.

Virtual-first is the future of marketing and advertising, starting yesterday

Back in the 50s, TV was novel and new. Families gathered around the tube to catch the latest episode of Bonanza, or I Love Lucy. In line with the times, advertisers put their budget behind TV commercials. Times have changed since then, and now families connect through social media apps like Facebook, Instagram, and Snapchat. Friends share funny articles from BuzzFeed and The Onion. And kids look up to YouTube stars instead of movie superstars. So what does this mean for advertisers?

As consumers embrace on-demand services like Netflix, Hulu, and YouTube, traditional TV commercials are becoming less effective by the minute. As a result, U.S. digital ad revenue overtook TV for the first time in 2016—$72.5 billion to $71.3 billion.

The same year digital ad revenue surpassed TV, Gen Z and millennial consumers admitted to watching two and a half times more internet and subscription-based video than TV. Of those, 67 percent admitted they couldn’t survive without YouTube. Another 51 percent reported Netflix as their preferred video source, followed by social media at 48 percent. For marketers in a virtual world, this means putting their money where their audience is: online.

So how can brands reach audiences on YouTube and social media? Influencer partnerships. Working with an influencer—someone with a large, engaged following—allows you to reach a wider audience.

But what makes influencer partnerships so effective in a virtual world? Influencers have spent time building the “know, like, and trust” factor with their audiences. As noted by Google, 6 out of 10 YouTube subscribers would follow shopping advice from their favorite content creators (versus TV personalities). Think Mary-Kate and Ashley Olson were influential? A child YouTube star named Ryan raked in $11 million in just one year for reviewing toys.

Make it personal and intentional

Speaking of relatability, gone are the days of slapping up a billboard and waiting for the calls to roll in. In a new era of cancel culture, customers are more willing than ever to withdraw support from a company that fails to take a stand—or worse, one that takes a stand contrary to its supporters.

Likewise, consumers are tired of being advertised to. According to Accenture, “Ad blocking is consumers’ response; it’s their way to say … enough of the barrage of unnecessary, unwarranted, irrelevant messages. Companies not wired to be thinking about personalization will really struggle going forward. Re-targeting is not the answer … consumers want the right message, at the right time, on the right device, right now.” Simply put, advertisers must know their audience to a T and provide tangible value—or consumers will quickly move on.

In a busy virtual world, quality over quantity matters

“But more ads means more leads, right?” Not anymore. To get quality leads, advertisers need to replace the one-size-fits-all sales funnel with individual customer journeys and engaging experiences. This shift means marketers need to understand their customers on a personal level to address their concerns and build brand trust. Authenticity is a buzzword for a reason.

If you’ve ever seen a BuzzFeed article with tens of thousands of likes, comments, and shares on social media—chances are you’ve seen a native ad. Publishers like BuzzFeed strategically craft viral content and distribute it to their massive audiences. And brands pay them to do the same for them in the form of sponsored content. Why? Because it works. One report found that consumers looked at native ads 53 percent more frequently than display ads, and 32 percent said they would share a native ad with a friend.

Native advertising works because (when done right) it’s non-intrusive and provides value to the end-user—either in the form of entertainment, information, or inspiration. Rather than appearing as a pop-up or sidebar, a native ad is a central focus. The content is the ad and vice versa. In turn, readers see native ads in a more positive light, rather than “just another annoying ad.” And because consumers hang out online these days, native ads meet them where they are—in the best way possible.

Not to mention marketing and advertising in (literal) virtual reality

Oh yeah, we’re going there. With virtual reality (VR) headset sales on the rise, you can bet VR ads are the next new thing in marketing. VR takes immersive marketing to a whole new level. And VR ad platforms like VirtualSky and Immersv already exist to support in-app advertising.

Will inescapable advertising in VR upset viewers? Sure—if you approach it wrong. But if you make it fun and entertaining, it works a lot like native advertising. Take Honda’s 360-degree VR Civic Racing experience, for instance. The interactive VR ad lets viewers get behind the wheel—without stepping foot outside their house. And, if we’re honest, VR could quickly become the standard during COVID times. Why leave home to test drive a car when you can do it from the comfort of your VR?

Only the most creative will survive in a virtual world

In a more virtual world than ever, advertisers can expect to reach consumers online. But to see real success with digital advertising, brands need to provide value, build brand trust, and show respect for their audience’s time. The door may be closing on traditional advertising—but the era of digital advertising offers boundless opportunities to connect with consumers in new and creative ways.